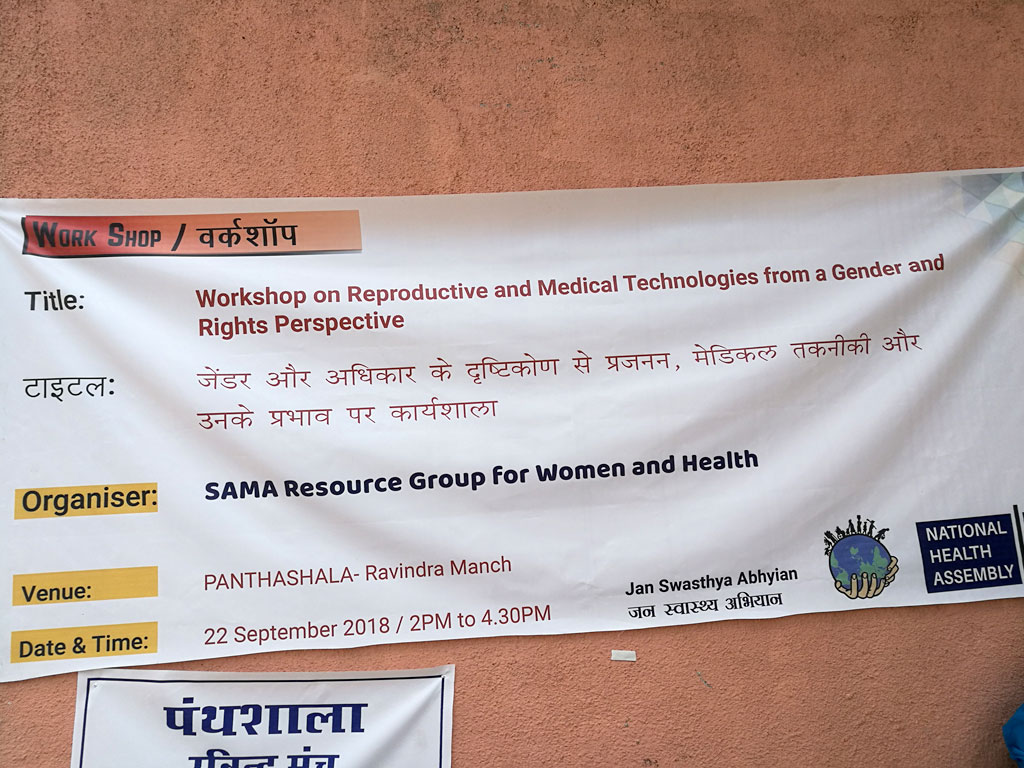 The Third National Health Assembly was a two-day long event in Raipur, Chhattisgarh, and saw nationwide participation of organisations and individuals working on health and healthcare, in different capacities. As part of the Self Organised Workshops sessions on the first day, 22 September 2018, Sama conducted a workshop titled ‘Medical and Reproductive Technologies from a Gender and Rights Perspective’. The workshop sought to use the lens of gender to address social, ethical and regulatory issues related to medical and reproductive technologies. 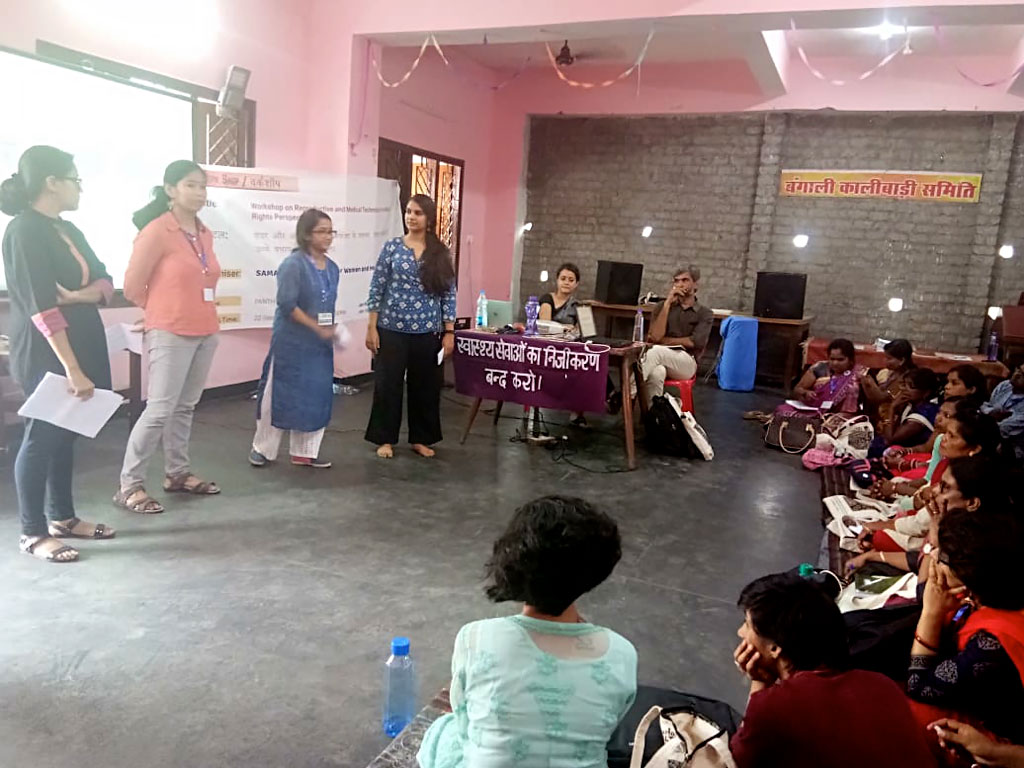 The workshop commenced with a short skit presented by the Sama team, called ‘Par Kiske Liye’, which touched upon issues such as contraceptives and free choice, accessibility to medicines and drugs, and uterus transplantation. Using a narrative format, the team highlighted the dilemmas faced by a majority of women who are unable to grapple with the adverse effects, high costs and unfamiliarity of new medical and reproductive technologies. The skit was followed by two sessions led by Vrinda Marwah and Priya Ranjan, respectively. 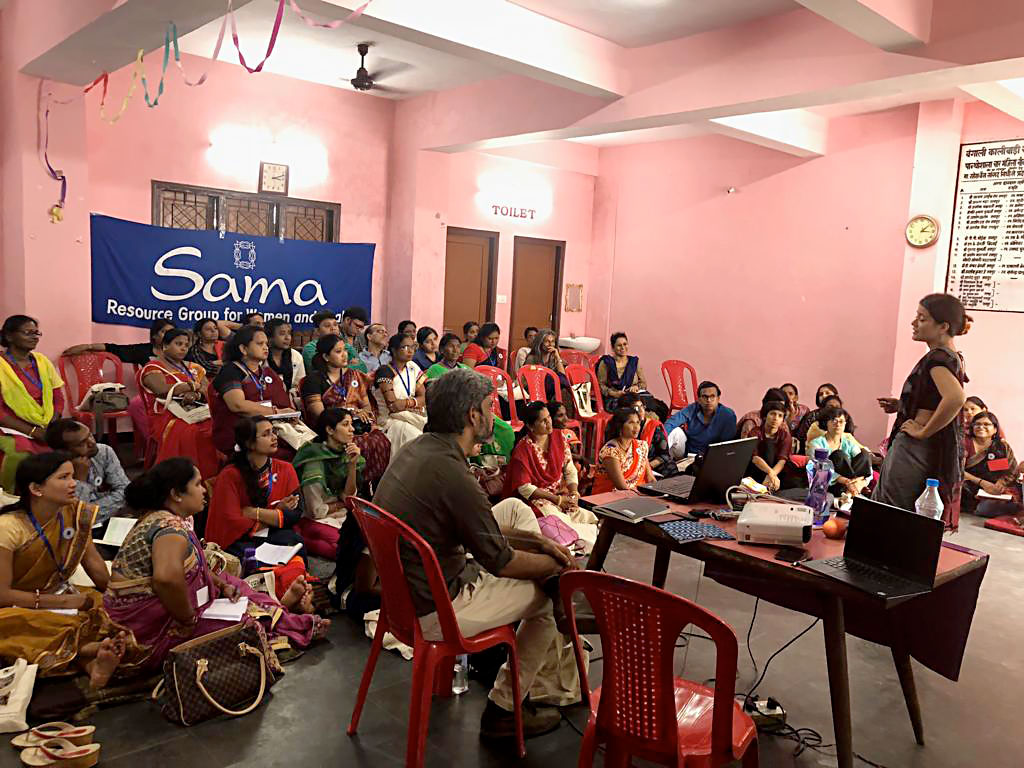 Vrinda Marwah’s session largely focused on Assisted Reproductive Technologies and Surrogacy, delving into their interlinkages with other social determinants.  Choosing to start the discussion in a participatory fashion, Vrinda opened the floor to comments around the meaning and use of ARTs to the audience itself. These technologies were identified as being useful for those who are unable to have biological children of their own. The session then highlighted prominent types of ARTs (IVF and IUI), their low success rates, the increased chances for multiple births owing to the transfer of more than one embryos, higher chances of C-sections, etc. It further touched upon malpractice by medical providers, medical tourism as a way of attracting foreign clients, a lack of regulation and incomplete or improper information given to patients. 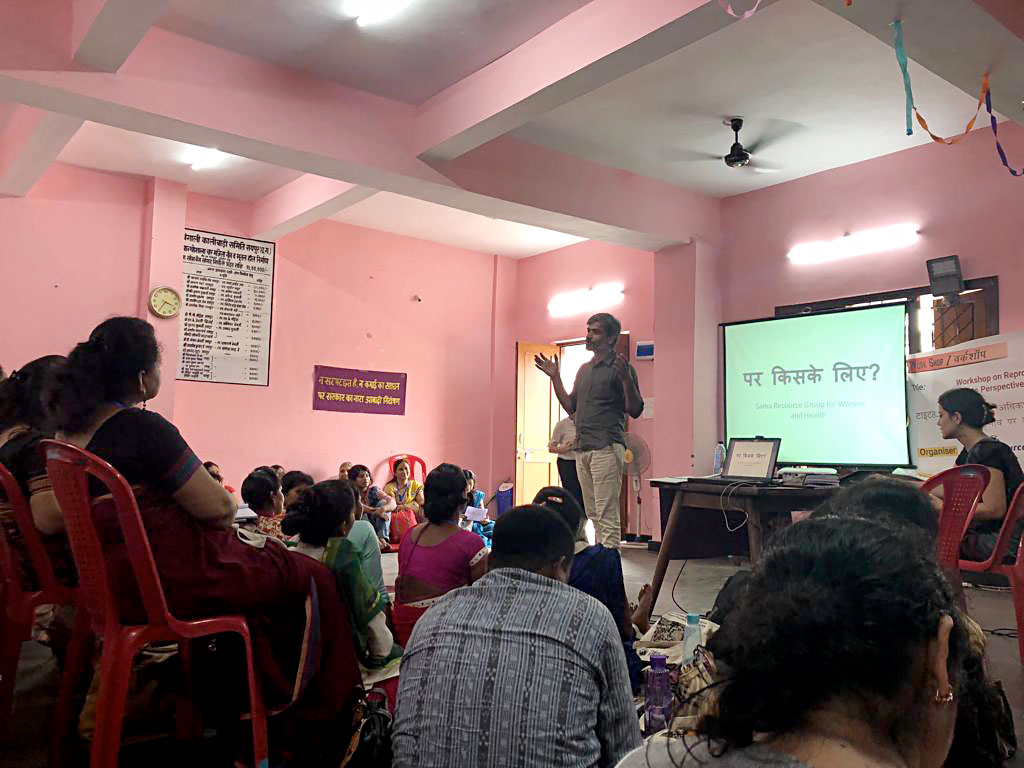 The session led by Priya Ranjan took off from Vrinda’s session, using ARTs as an example of the close ties between technology and society. He argued that while science and technology are often seen as neutral signs of progress, they cannot be understood devoid of societal values and norms. This, he said, was evident in the advancement of ARTs despite the high risks and low success rates, due to the social desire for biological children rather than adopted children or childlessness. He highlighted the importance of children within society to fulfill the need for furthering lineages, maintaining caste lines and to bestow upon women their essentialised role of mothers. Priya Ranjan also stated the paradox of continual advancement within the medical sciences seen against with the deaths of million, each year, due to basic illnesses. This he attributed to the fact that medical advancement is led not by a desire to improve health conditions but by large pharmaceuticals companies looking to make profits. This means that there is less research around basic diseases such as malaria, tuberculosis, etc., which affect the majority of the population; and increased research around diseases that affect a smaller but richer minority.

The two sessions were concluded with a round of questions. These dealt with the impact of campaigns against certain diseases, like HIV; the role of the pharmaceutical industry in the push for certain medicines and treatments; as well as the legal implications of children born through ARTs like surrogacy.